Why Stationery Fraud is Killing your Business

“Everybody lies”.  The catchphrase of my favorite TV Doctor, House. It turns out that “Almost Everybody Steals” according to Dan Ariely, a renowned Behavioural Economist at MIT and star of the recent Netflix Special, (Dis)Honesty.

70% of people will cheat for financial gain. Dan’s Matrix Experiment pitted test subjects against a straightforward math problem. The problem was not difficult, but participants only had 5 minutes to complete 20 questions. As a result, most people only got 4 or 5 right out of a total of 20 questions.

Here is the rub.

Contestants got a dollar for each question they got right. Even better than that, they could self-certify their results. Better again, they were then asked to shred their paper in a shredder at the top of the room. The perfect storm for financial gain without any prospect of getting caught.

Or so they thought.

In reality, the shredder was hobbled and shredded nothing. This allowed the researchers to compare the actual test score vs the one that was self-reported.

Bear in mind, contestants could have reported a perfect score and netted an easy 20 bucks. On average though, most only over-reported their success by two questions. Rather than a ‘big lie’ it was just a white lie they were telling. 5% of participants reported a perfect score. Their theft, although more brazen, was less economically significant than the $1-$2 theft that 70% of subjects committed. Their economic impact was over 125 times that of the $20 cheats. 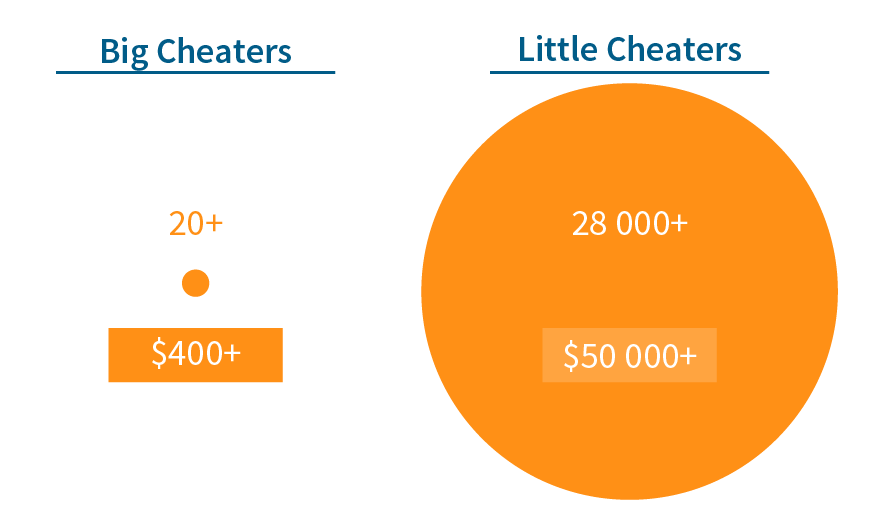 So what does this tell us?

Most of us cheat, but not by much. The economic impact of that theft is way more than what may be considered “serious” theft. The employee that walks out the door with a computer they never owned actually costs you less than the employees that are stealing pens and paper consistently over years.

Now no one likes to admit their staff steal. But, evidently, we all do, or at least most of us do. And while we may not steal much, the combined economic impact outweighs what we may consider to be “real” theft.

That is why establishing purchasing policy, in a way that doesn’t impede your staff’s effectiveness is key.  Implementing ProcurementExpress.com actually frees up accounting staff from menial admin but also makes sure that every pen is accounted for in advance. Moreover, putting a purchasing policy in place shines a light on behaviour and attitudes towards spending, meaning that even though “everybody lies”, they don’t have to be tempted to do so.